the world of children's literature 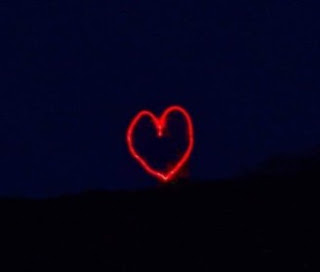 
On April 3, 2020, Greg Grotton, chariman of the board of selectmen in Union, Maine, accepted a community project to install a giant lighted heart to thank the essential workers.

Greg said that the heart was really a community effort, because the land is owned by Brian Powers, Dan Beasly loaned him a generator, and Wayne Kirkpatrick, the owner of Four Corner Variety Store, rented a truck for him.

Greg got the idea when his daughter, Kimberly Wickenden, who teaches Camden Rockport elementary school gave her students an at-home assignment to draw a poster to thank the essential workers. Greg said the parents sent pictures of the thank-you posters to his daughter. He then was inspired to build a 25 ft. x 35 ft. heart out of wood and Christmas lights by the blueberry fields of Clarry Hill Rd. , where he has displayed a lighted star at Christmas time for the last three years.

Greg said that he asked his daughter, Kimberly, to invite her students and their parents to come to the Union Methodist Church in Union for a surprise party, where he told the families about the heart. "The kids loved it," Greg said. 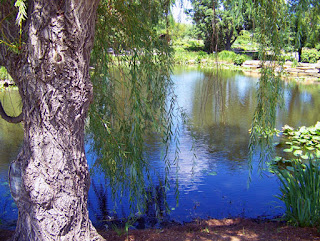 Beside the Pond
by
Jayse Bickel
(age 12)


I look over the pond,
My brothers beside me.
The great Oak brags that he is stronger;
We do not deny it.
Though wind blows,
My brothers and I bend.
Yet the Oak breaks.
We feel the wind;
The wind makes us sing.
The earthworms burrow beneath our roots;
It tickles.
They make us laugh.
Dragonflies climb on us
To take off their coats
And merge into adulthood.
What am I?

(Assignment for Lessons #17 - Point of View) 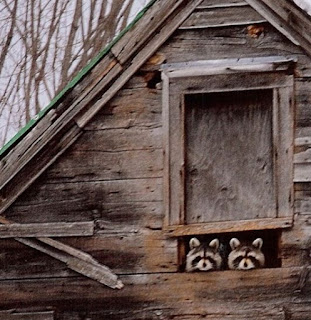 
Once upon a time, there was a middle-aged 45-year-old woman named Bess, who had just bought an old house on a hill in a town called Swampland. The man that owned the house before her told her that it used to be an old robber hideout.


One day, as she was fixing up the kitchen, she heard a loud noise coming from the ceiling. She thought to herself, "Must be those raccoons again. I'll take care of them later."

After she finished cleaning out the acorns in the cupboards, she thought to herself, "Better go take care of those raccoons." She sighed.

As she walked up the creaky attic steps, she heard the raccoons again. Bess made it to the trapdoor that led to the attic. She opened the door and climbed out into the attic. She looked around at the old trunks and dusty boxes. Bess walked up to an old green trunk that all the rattling noises seemed to come from.

She lifted the lid and stepped back. Instantly, a white shape rose up from the trunk, and she heard a scratchy "shcrchhht shhht."

She ran down the stairs, all the way to town, right up to the sheriff"s office. "You've got to help me!" she shrieked. "There is a ghost in my attic!"

"Now, now," said the sheriff. "There's got to be a logical explanation for this. I'll come with you to investigate this 'ghost' business."

So the sheriff drove Bess back to her house. They got out of the car and walked carefully up the steps into the house, past the kitchen through the door, up the attic steps, and into the attic

They froze. "Now, Bess," said the sheriff. "There's no such thing as a g-g-ghost," he whispered.

"It's over here," Bess whispered.

The sheriff walked up to the trunk, paused for a moment, and lifted the lid.  But nothing came out.

The only thing that was in there was an old white sheet. But wait a minute, the sheet was breathing. Bess yanked off the sheet, and under were two raccoons.

"So it was raccoons," laughed Bess. 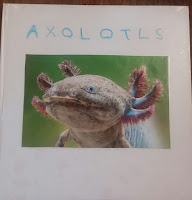 Axolotls are salamanders. They keep their baby bodies even when they are adults. 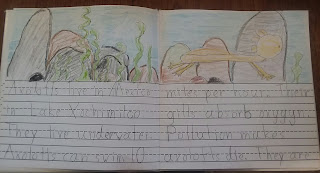 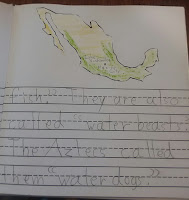 Axolotls have feathery gills. They have a long tail like a fish. They have a cute smile. Axolotls can grow 9-18 inches long. They weigh about 10 ounces. They can grow new body parts. Axolotls don't have any eyelids. 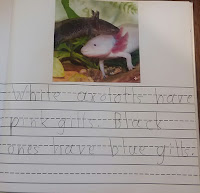 Axolotls can be golden, gray, pink, and brown with golden dots. Wild axolotls are dark and can change colors to camouflage. White axolotls have pink gills. Black ones have blue gills. 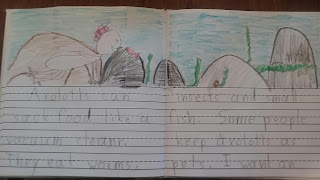 Some people keep axolotls as pets. I want a pet axolotl because they are so cute! 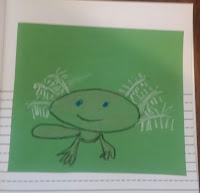 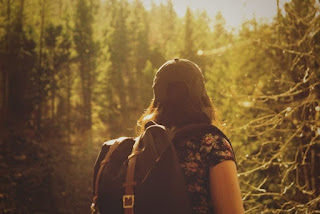 The Camp-Out
by
Brooke Bickel
(age 14)

I am having a camp out with Lilee, Aileen, and Tawny. At Camp Kanesatake.
June 14 - June 16. It would be great if you could join us.
Tents will be provided. If you can come, could you bring some pancake mix for everyone?

Laurel couldn't wait. She loved to be outside. She liked to climb trees, go fishing, and stargaze.

After a long car ride, her dad finally got to the campground. She stepped out of the car and heard birds chirping. The sun was shining brightly through the trees. On one side, she saw a forest. On the other side, she saw a sparkling river.
Laurel spotted Cadence by the river sitting at a picnic table. She said "goodbye" to her dad and headed over to say, "hello."

"Hi, Cadence! Where is everyone else?"

"They're at the campsite finishing setting up." She pointed to a path between two tall pines. "Wanna head over?"

"Actually, I need to use the restroom."

After being relieved, Laurel looked around for Cadence, but she wasn't there. Laurel thought she must have gone ahead, so she gathered her baggage and set off for the trail.

When she got to a fork in the road, she set her bags down and took a quick drink of water. I wonder which path I should take. The one on the right looks a little overgrown. The one on the left looks more used. I think I'll take the left path. The sun was just beginning to set, and the trees hanging over the path made it look dark. I better hurry. I don't want to get stuck in the dark.  All by myself.  Alone.  An owl hooted. Suddenly, a twig snapped. Cautiously, Laurel scanned her surroundings.  Seeing nothing she shouldered her bags and continued down the darkening path.

Suddenly, she saw something out of the corner of her eye. She stopped and made sure her eyes weren't playing tricks on her. They weren't. Laurel's feet couldn't move as she watched the shadowy figure step from tree to tree coming closer and closer. Suddenly she couldn't see it anymore. Where did it go? Should I hide or run for help? Should I just stay where I am and hope it didn't see me?

" Sorry, I wouldn't let you get lost. I wouldn't want you to miss out on the s'mores."

God is the One! 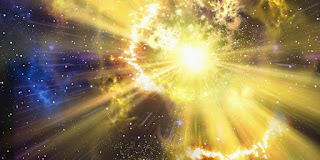 God is the One!
by Malcolm Blake
(age 7) 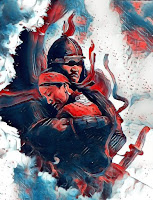 
Long ago, far away
For two people, twas a special day.
Nine-year old Temujin was meeting his wife-
To-be for the very first time in his life!

Her name was Borte, she was near his age.
At least that's what I heard from the local sage.
Several years passed, then Temujin came
And asked Borte's father to give him his dame.

Poor Borte! This way it could not stay,
For an enemy tribe kidnapped her one day,
And took the poor dear far away.

O Borte! She feared and she hoped,
She poked and she moped!
Until, one night, as she lay
In the dead of night, she heard someone say,

"Where is Borte? We are under attack!"
Then someone came in with a sack.
"Get into the cart . . . it's outside. Hurry!"
Then out they went in a hurried flurry.

Into the cart they leaped,
All crowded together and heaped,
(There were other people in the cart,
Most were cowards on their part.)

When Borte heard a lot of noise
And recognized her husband's voice
Calling her name. O how sweet it sounded!
And out of the cart she bounded!

On she rain, into the fray,
As over and over Temujin would say,
"Borte! Borte! I am here!"
Oh, How sweet those sounds to hear!

She found his horse and
Grasped the reigns and
He looked down. In a moment
They were in each others' arms,
Free from all cares, fears and alarms.

And Borte lived happily
Ever after with Temujin.
This happened in the Middle Ages.
Don't ask me how I know, ask the sages!